The Vernon Davis Superman Leap is My New Favorite Play

This is how you win a football game. Forget about the score. If you’re not literally jumping over defenders trying to tackle you then you’re doing it wrong. It’s all about style, and the Superman leap is as fantastic as it gets. If Vernon Davis scores another touchdown without utilizing the leap I’ll be terribly disappointed. 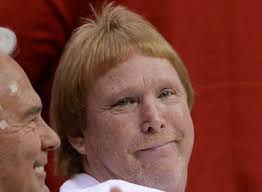 If you’re an Oakland Raiders fan and you’ve ever wondered why your team has been so bad for so long then you really don’t need to look any further than Mark Davis. No self respecting man would ever walk around with that haircut. Ever. THIS is the guy in charge of making decisions for your franchise. All those bizarre head coaching changes make a lot more sense now. The Jamarcus Russell draft? Crystal clear. When you’ve got a haircut like that every decision you make needs to be questioned. Someone needs to hold a closed door meeting with Mark and force him to wear a hat whenever he’s in public. Only logical solution I can think of.

(Source) “Don Cheadle will play Miles Davis in a biopic the actor has long planned on the innovative jazz pioneer.

BiFrost Pictures told The Associated Press on Wednesday that it will finance and produce “Kill the Trumpet Player,” with Cheadle also making his directorial debut. Cheadle has been trying to make the film for years. Production is finally set to begin in June.”

We haven’t seen much of Cheadle on the big screen lately, as he’s been busy with a lead role on Showtime’s House of Cards, but it looks like that’s about to change. The Kansas City native is now set to direct and star in the new Miles Davis biopic, with production set to start in June. Davis, dubbed “the epitome of cool”, was one of the most influential jazz musicians of all time. He was praised throughout his long career for the ability to blend various styles of music, including jazz, funk, rock and bop. Cheadle is an Academy Award nominated actor (Hotel Rwanda) who has delighted fans on both the big and silver screens. This is a very personal and important project for Cheadle, as the report states that he’s been trying to make the film for years. Here’s hoping he knocks this one out of the park.

Visit Movie Pilot to see this and some of our other film inspired blogs.

Mike Davis With the Latest Hit of the Century

Mike Davis is an animal, and that’s not a compliment. Just a dirty play. How he didn’t get thrown out is mind boggling.

“Martell Davis faces sex trafficking charges. He makes catchin’ pimps look easy. Martell Davis, 34, was clad in a t-shirt that read “I make pimpin’ look easy” when he was arrested in late July and charged with sex trafficking, according to federal court filings published this week by The Smoking Gun. Davis’ arrest was the result of an undercover operation by San Diego vice cops. A detective responded to an online prostitution ad and set up an $80 “date” for July 26 at a Best Western hotel. According to the report, a 17-year-old girl was waiting and officers promptly arrested her for prostitution. They then confiscated her phone and used it to text Davis, who they believed was her pimp. Posing as the girl, an officer asked how much to charge for anal sex, and Davis allegedly responded, “Oh sh*t make him break the bank babe,” and suggested at least $200. They texted back and forth for a while, and Davis agreed to pick the teen up later that night. When he showed up, cops arrested him and charged him with sex trafficking of a minor. Cops say Davis told them he did not know the prostitute was a minor, claiming just “just helping [her] out” and that he acted as “protection” for her.” – Huff Post

Maybe not the brightest move. But Martell Davis needs to let the good people of San Diego how good he is at his job. In this case, that job happens to be illegal. Would we be ridiculing a librarian who walked around with a shirt that said “I Make Renting Books Look Easy”, or a firefighter with a shirt that said “I Make Spraying My Hose Look Easy”? I guess the latter suggestion is kind of inappropriate, but you get my point. Don’t hate Martell Davis, hate the pimp game for making it so damn easy for him.